Twelve years ago today a litter of Springer Spaniel puppies was whelped at Ian & Ann Christie’s Squareclose Kennel in Fife, Scotland. All of the puppies were to be named beginning with the letter “G”. Only two came to North America that I am aware of, “Gwinn” to Tom and Myra Bratrud in Alberta, Canada and “Gunna” to me in Olympia, Washington. In Gaelic “Gunna” means “Warrior Princess” and the name never seemed to fit. Soon after she arrived the name “JoJo” came to mind and she’s been called that ever since.

JoJo is a special girl. Her life in the U.S. got off to a very rough start. When I went to pick her up at the KLM Air Freight Terminal at Seattle’s SeaTac International Airport in November of 2010 I was informed that they did not have a puppy from Scotland. Her connecting flight from Amsterdam had been cancelled and no one bothered to inform me. By the time I was able to get her rebooked and she arrived the next day, this 10-week-old puppy had been locked in a crate for over 29 hours!

“The sweetest dog I’ve ever met.”
— Everyone who has ever met her 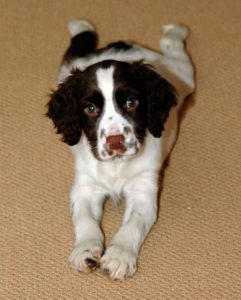 Making things even worse, once she finally did arrive I could hear her whining in her crate and I pleaded with the KLM people for me to be able to let her out. But I was not allowed to even see her until her paperwork cleared customs at a facility about a mile away. After two exasperating hours at the U.S. Customs office they finally turned her over to me. By then she’d been locked a her crate for over 31 hours. To say that she was traumatized would be an incredible understatement.

Of all the dogs I’ve owned and helped train over the past 55 years, JoJo has been the most challenging. She actually quickly adjusted to home and the very quiet and secluded two beautiful acres we lived on that was surrounded on three sides by Wildcat Cove – part of the Puget Sound. She made friends with both of my other Scottish imports, Ria and especially Vinnie. After a week or so she seemed well adjusted and normal.

Then I began to socialize her away from home and the same terror I’d witnessed at the airport came back with a vengeance. New places, new people, and especially new dogs put a great fear into her. It took about two years of very patient work for her to feel even somewhat at ease away from the safety of our home property.

Due to all of this, JoJo has never been campaigned, but became a great travel companion, mom of three litters, and a wonderful gundog who, at age 12 now, still finds and retrieves wild pheasants with the best of them! She is mom to AFC JoJo’s Easy Keeper and loves going to field trials and meeting both old friends and new people now. She is still very cautious around strange dogs but no longer terrified of them.

Of all the dogs I’ve owned she may actually be my favorite. We’ve come so far together and she is so sweet! She reminds me of John Steinbeck’s dog in his beautifully written novel, “Travels With Charley”. Happy 12th birthday my friend!